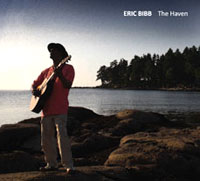 Celebrating the release of his new album “The Haven”, Eric performed a concert September 7th, 2011 at The Haven holistic retreat on Gabriola Island, BC, Canada that concluded his “Spirit In The Song” 5 day workshop.

The album shares the feeling that accompanies the birth of an inspired song. Truly an album to discover, appreciate
and treasure! 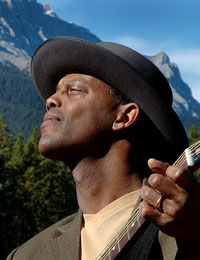 The idea to create Luna Records, and record unique albums, occurred while promoting Eric Bibb in the fall of 2002. Recording a spiritual album was a frequent request made of Eric. This shared interest crystallized for us while he was performing at the Canmore Folk Festival in the summer of 2003. Plans were made to record an album in Banff later that fall. An ambitious three night recording schedule was set for the early morning hours after Eric’s nightly performance.

A makeshift recording studio was set up within an artist retreat at The Banff Centre. This star shaped wood cabin, complete with a glass pyramid roof and set beautifully in a secluded wooded area, was inspirational and allowed for a very natural, pure and honest way to record Eric's inspirational songs. The album “Twelve Gates To The City” shares a beautiful collection of original and traditional spirituals, truly a collector’s masterpiece!

More recently, Eric wished to record another album to share the experience and feeling that accompanies the birth of an inspired song. By choosing to record in a minimalist manner, he recaptured the feeling recalled from when the songs first “arrived”. Presenting most of these songs as they first came into being, with just voice and guitar, Eric shares this magical, mysterious and exhilarating journey with us. “The Haven” album is a beautiful package of art and song to discover, appreciate and treasure. Enjoy!